A Halloween Cocktail – Mezcal and Rum 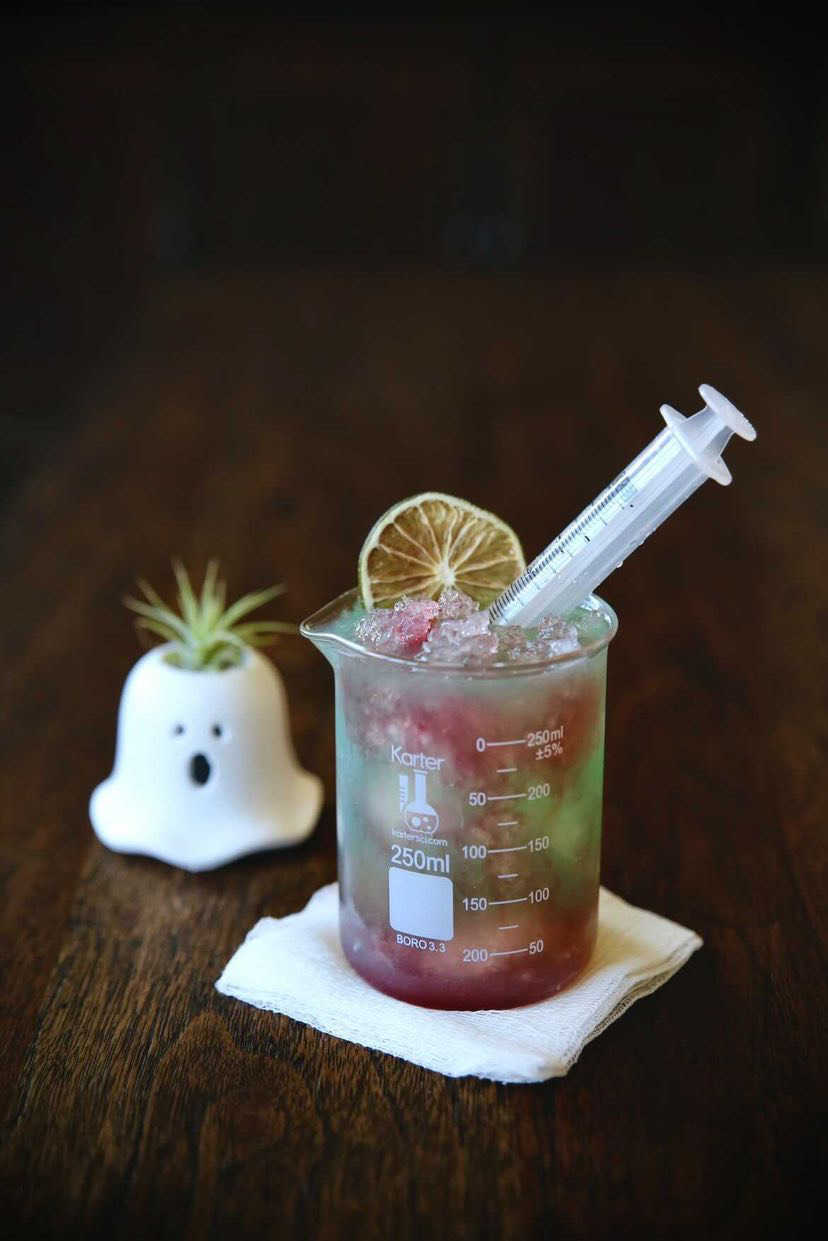 Leaves are tumbling in the wind. Darkness falls early. On this long night, the veil between this world and the next is thin, and any number of monsters could wander through–yes, even your neighbor’s six-year-old drooling hot pink costume store blood all over his dad’s old dress shirt as he swoops across your porch flapping a black towel behind him while shouting “I VILL SUCK YOUR BLOOD.”

In related news, Halloween is one of our favorite low-key cocktail occasions. If you’re at that age when your holiday role is to fill the candy bowl and make sure those little Cruella DeVilles and Black Panthers don’t take more than two pieces each (yes, even you, tiny T-rex), we’re hoping you agree. The real consolation prize to outgrowing trick or treating is the chance to sip something delicious from your martini glass in between knocks at the door.

Need an idea as to what that glass might contain? Callisto Botanical Rum is here to help. This time of year, we’ve been loving a riff on the Rum and Smoke cocktail from award-winning restaurateur Geoffrey Zakarian–only instead of using generic light rum, we swap in Callisto, naturally.

Callisto’s dry, floral, and smooth flavor comes from more than a dozen locally sourced, organic California botanicals. That floral, piney flavor blends seamlessly with the smoky, salty, vegetal flavor of mezcal and peated Scotch whisky, giving this amazing cocktail yet another layer of complexity. Here’s how to make one for yourself, and how to make a punch inspired by the cocktail for eight of your favorite friends.

Combine all ingredients except garnish in a cocktail shaker or mixing glass. Add a large scoop of ice and shake vigorously. Strain into a chilled rocks glass containing a large ice cube, garnish with the lime wedge, and serve.

If your plans call for a Halloween party rather than a low-key evening at home answering the doorbell, never fear. The Callisto Rum and Smoke scales up beautifully–plus, punch gives you a chance to show off your ice game (ice hands frozen in latex gloves, anybody?). Here’s how to do it:

Combine the simple syrup, juices, and spirits in a punch bowl. Stir thoroughly to combine. When you’re ready to serve, add the ice, top with the ginger beer, and add a ladle to let partygoers serve themselves.

Why the extra ginger beer and pineapple juice in this version? The straight-up cocktail packs a serious wallop, and part of the fun of a party punch bowl is the chance to go back several times. Adding juice and ginger beer brings down the ABV, making this cocktail a bit more sessionable. Plus, the warm spices and tart tropical fruit plays perfectly with the rich, herbaceous flavor of the Trinidad and Nicaragua rums that form the base of Callisto Botanical Rum.